Information and Resources for those living with Parkinson's Disease

Welcome to The Center’s “Living with Parkinson’s” page.

Here, you can find information, resources, and programs to better the lives of those living with Parkinson’s.

If you have any questions, please contact Linda at [email protected] – thank you!

Fight Back Against Parkinson’s!

Does someone you know suffer from speech & communication challenges due to Parkinson’s Disease?

Click here to view the full flyer and learn more!

Music is a great way to maintain and develop vocalizing abilities.

Before the program, please gather a common household object to use as a small percussion instrument for creating rhythms, such as an upside down bucket with a stick; 2 wooden or metal spoons; a set of keys; beans or rice in a small plastic container or empty water bottle, or your hands for clapping!

with Board Certified Music Therapists

Twice a month, every other Thursday at 12 noon. 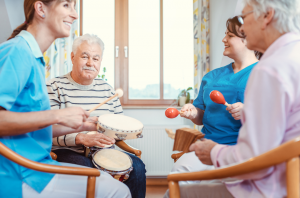 What is Parkinson’s disease?

Parkinson’s disease (PD) is a neurodegenerative, progressive disorder that affects predominately dopamine-producing neurons in a specific area of the brain called substantia nigra.

How common is PD?

Nearly one million Americans and 10 million people worldwide live with PD, with approximately 60,000 people in the U.S. diagnosed with PD each year. It is the second most common neurodegenerative condition after Alzheimer’s. The number of people with
PD will increase substantially in the next 20 years due to the aging of the population.

What are the symptoms of PD?

Symptoms generally develop slowly over years. The progression is often different from one person to another. People with PD may experience:

In addition to movement-related (“motor”) symptoms, Parkinson’s symptoms may be unrelated to movement (“non-motor”), such as apathy, depression, constipation, sleep behavior disorders, loss of sense of smell and cognitive impairment.

Who does PD affect?

Getting older is the biggest factor for PD with most people diagnosed in their 60s. In rare cases, some people will develop PD before age 50, known as young-onset PD. Men are 1.5 times more likely to have PD than women.

Directly inheriting the disease is quite rare. Only about 10 to 15 percent of all cases of Parkinson’s are thought to be genetic forms of the disease. In the other
85 to 90 percent of cases, the cause is unknown.

How is PD diagnosed?

There is no diagnostic test for PD. Physicians rely on a combination of clinical exams and tests evaluating symptoms. Often, a Parkinson’s diagnosis is first made by a primary care physician. Many people seek an additional opinion from a movement disorder specialist, a neurologist with experience and specific training in the assessment and treatment of PD.

How is Parkinson’s treated?

It is possible to have a good to great quality of life with PD. Treatment for each person with Parkinson’s is based on his or her symptoms, and may include medication and, later, surgical therapy. Other treatments include lifestyle modifications, like getting more rest and exercise. There are many medications available to treat Parkinson’s symptoms, although none yet that reverse the effects of the disease.

About the Parkinson’s Foundation

The Parkinson’s Foundation makes life better for people with Parkinson’s disease by improving care and advancing research toward a cure. In everything we do, we build on the energy, experience and passion of our global Parkinson’s community.

For more resources, visit the Parkinson’s Foundation by clicking here.