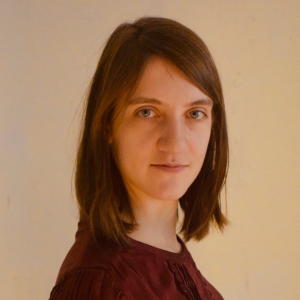 As both a classical guitarist and performer of her original music, Liz Hogg has toured twelve countries, playing numerous festivals and concert halls, including Carnegie Hall, Lincoln Center, and Brookfield Place, as well as Portugal’s Casa da Música and Mexico’s Tlaqná Concert Hall. She has won awards that include the Mannes School of Music Dean’s Award, the Maurice Kagan Memorial Scholarship Award for Excellence in an Orchestral Instrument (first guitarist recipient), and was a Fulbright-García Robles Scholarship semi-finalist. Liz was also the first American to win a fellowship for performance and study at the Lanciano International Guitar Festival in Italy and has received grants from Chamber Music America, the Peter M. Gross fund and Queens College.
Liz has recorded nine full-length albums, five eps, and four singles. Her recordings and performances have garnered reviews from The New York Times, NME, Big Takeover and MTV. Beyond her solo music, Hogg plays in the band Safer, as well as Esenca Duo and various groups throughout NYC.